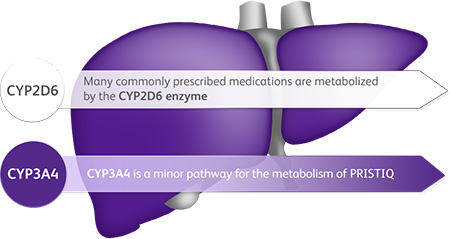 PRISTIQ does not have a clinically relevant effect on tamoxifen and aripiprazole, compounds that are metabolized by a combination of both CYP2D6 and CYP3A4 enzymes.
PRISTIQ is primarily metabolized by conjugation–independent of the CYP2D6 pathway.
You may want to consider a drug's metabolic pathway when choosing an antidepressant for patients on multiple medications.
Potential drug-drug interactions, which include contraindications and warnings and precautions, with PRISTIQ, including:
*Contraindications.
†Warnings and precautions.
Back to top
Back to top

Pharmacokinetic Profile
Drug is readily available to the systemic circulation—80% oral bioavailability
Predictable pharmacokinetic profile, regardless of CYP2D6 metabolizer status
Free (unbound) drug availability to cross the blood-brain barrier—30% protein binding
Neither a substrate nor an inhibitor of P-glycoprotein transporter
Back to top
Back to top

Study description
Data from two open-label, 2-period, parallel-group, crossover studies, one evaluating PRISTIQ 50 mg (N=14) and one evaluating PRISTIQ 100 mg (N=14) in healthy subjects who are extensive or poor CYP2D6 substrate metabolizers. The primary objective was to determine the difference in the pharmacokinetics of PRISTIQ when influenced by CYP2D6 polymorphism.12
Back to top
Back to top
Back to Dosing and Administration
Next to Protect Your Prescriptions
Pfizer Home

PRISTIQ 50 mg
The starting dose is the proven effective dose

PRISTIQ dosing
PRISTIQ for MDD
Proven efficacy with a low discontinuation rate* due to adverse events and a reduced risk of relapse in PRISTIQ responders1,2
*In a pooled analysis of 8-week studies, discontinuation rates were 4.1% with PRISTIQ 50 mg vs 3.8% with placebo.